VANCOUVER, BC, Nov. 30, 2020 – Kincora Copper Ltd. (the “Company”, “Kincora”) (TSXV: KCC) is pleased to report further assay results from ongoing drilling at the Trundle brownfields project located in the Macquarie Arc of the Lachlan Fold Belt in NSW, Australia.

Multiple and broad skarn horizons are being intersected at the Trundle Park prospect, at a scale much larger than was identified by prior exploration groups.

Important advances have been made in the geological understanding of both prospects and in obtaining good vector information potentially directing towards the core higher grade areas at each.”

Figure 1: Trundle is the only brownfield porphyry project held by a listed junior in the Macquarie Arc, Australia’s foremost and gold rich copper porphyry belt
Trundle is the western section of the Northparkes intrusive complex, that hosts the second largest porphyry mine in Australia, with initial Kincora drilling taking place at targets 8.5km apart 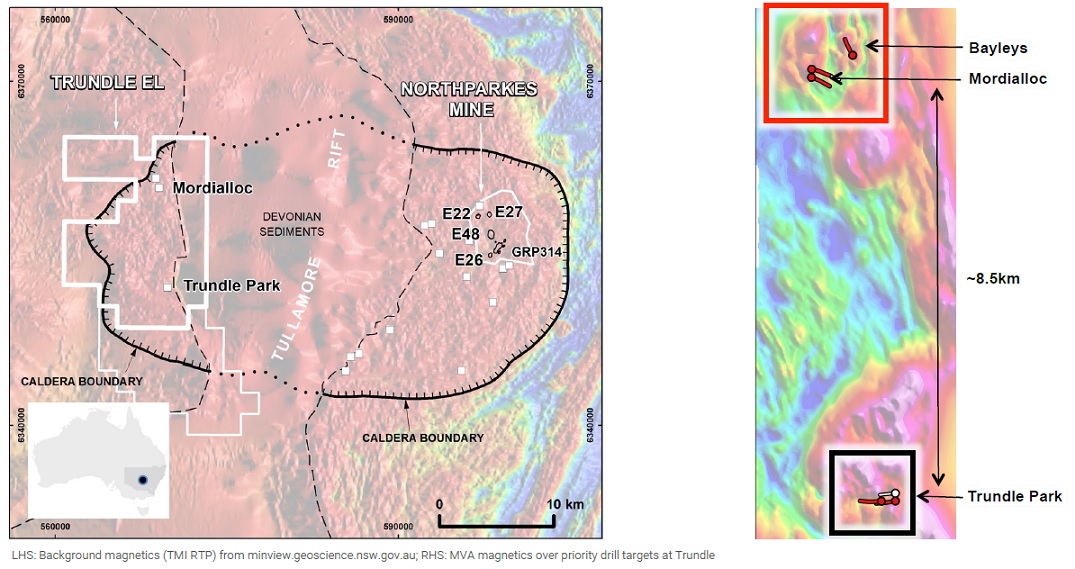 Figure 2: Kincora’s eleventh drill hole of our maiden drilling program at the Trundle project is ongoing 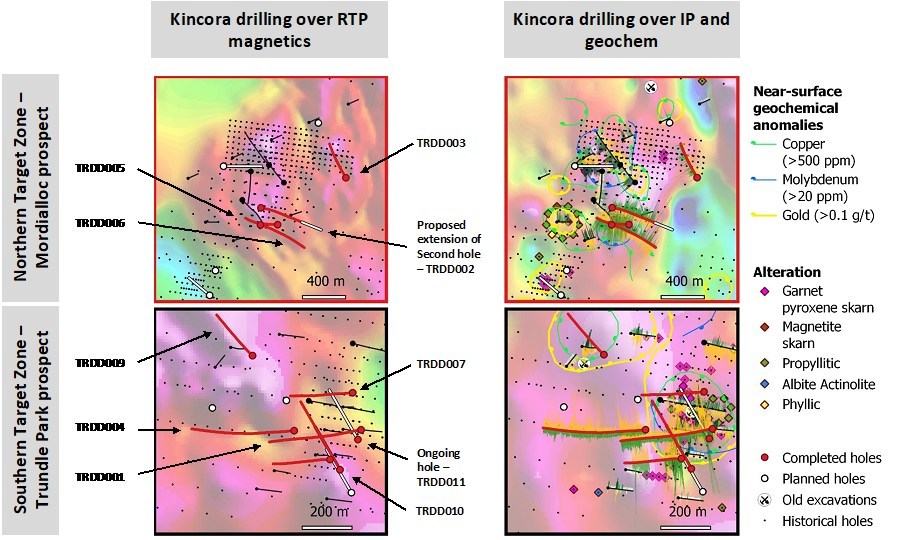 Following a series of drill holes at the Mordialloc prospect while seasonal lambing concluded at the Trundle Park prospect, particular encouragement for the targeted at/near surface skarn system has been gained with deeper drilling ongoing also testing the potential for a larger causative porphyry intrusion systems.

Further significant assay results for part of hole TRDD008 are provided in Table 1 with a current interpreted cross section of the central Trundle Park prospect region in Figure 4.

TRDD008, coupled with other recent drilling and technical re-logging activities have considerably improved the geological model for at the Trundle Park prospect, including:

(b) TRDD008 has returned the broadest two intervals of visual mineralization associated with the skarn alteration seen to date at the Trundle project, with multiple horizons intersected, increasing the potential scale of the skarn as a standalone target;

(c) Indications from the alteration and skarn-replacement suggest potential for further skarn-horizons to be located by subsequent step-outs from the drill hole collar towards the south and drilling back across bedding towards the northwest;

(d) Provide supportive vectors and trends towards a potentially more proximal and hotter temperature environment from TRDD007 to TRDD001 and then TRDD008, and the targeted causative intrusive source of the mineralization in the skarn; and,

(e) Higher grade potential is further illustrated by intense structurally controlled visual mineralization in ongoing hole TRDD011 (see Figure 3), hosted within further near surface skarn alteration (TRDD011 seeking to extend the skarn horizon northwest of TRDD001). This is in addition to a previous explorer interval of 2 metres at 20 g/t gold, 6.97% copper and 81 g/t silver from 64 metres1.

The average depth of prior explorer drilling at the Trundle Park prospect is only 28 metres with only two diamond core drill hole to moderate depths. Benefitting from this field seasons deeper and diamond core drilling, relogging of Kincora’s core has resulted in a change in current drill hole orientation towards the northwest. Our activities are resulting in a significantly improved understanding of the bedding direction hosting the skarn horizons, along with key structures/faulting and the identified multiple phases of mineralization within the skarn, all supporting a substantial mineralizing event and provide further vectors to the targeted causative intrusion system. 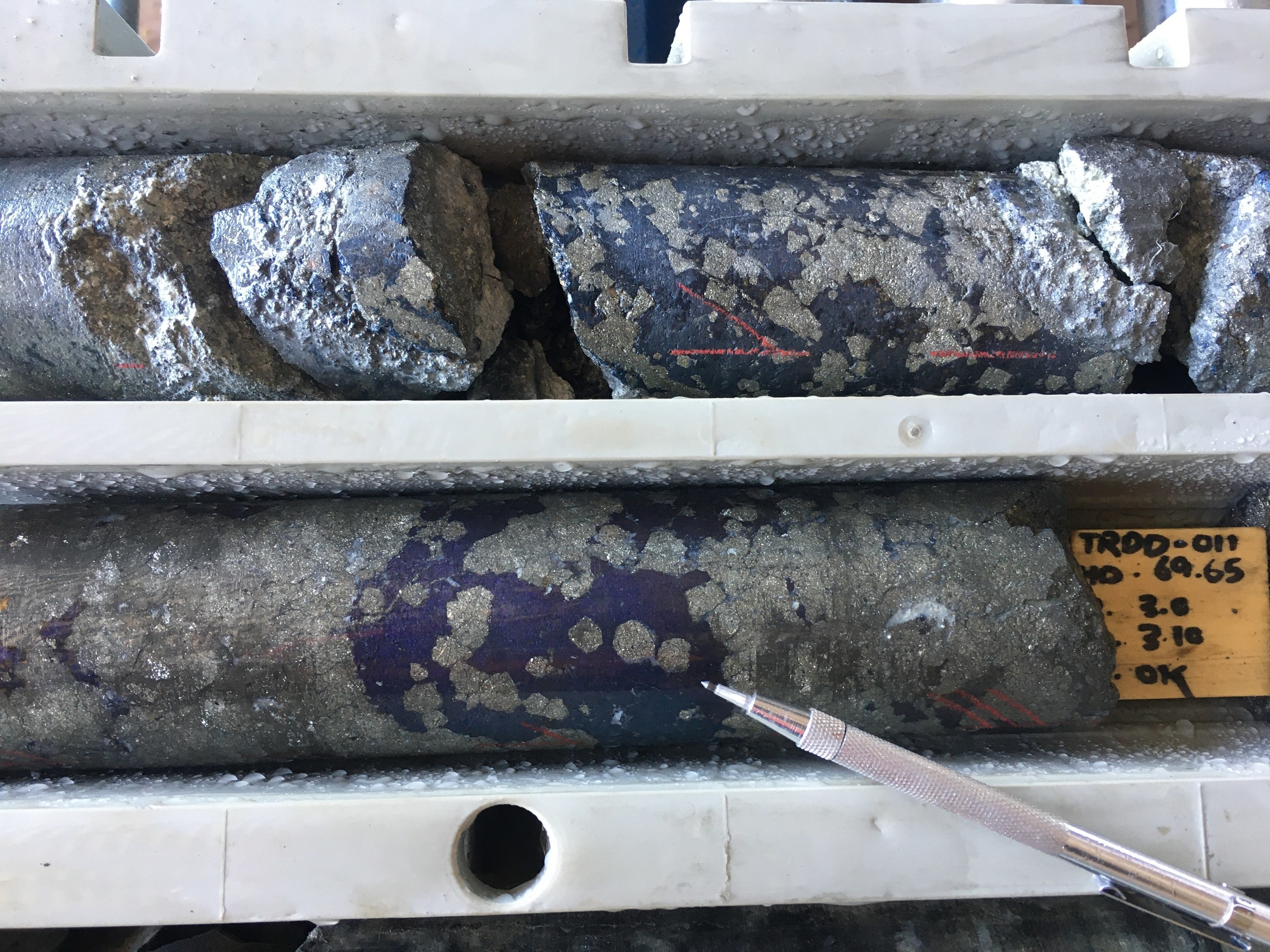 Interpreted near surface skarn gold and copper intercepts are calculated using a lower cut of 0.20g/t an 0.10% respectively. 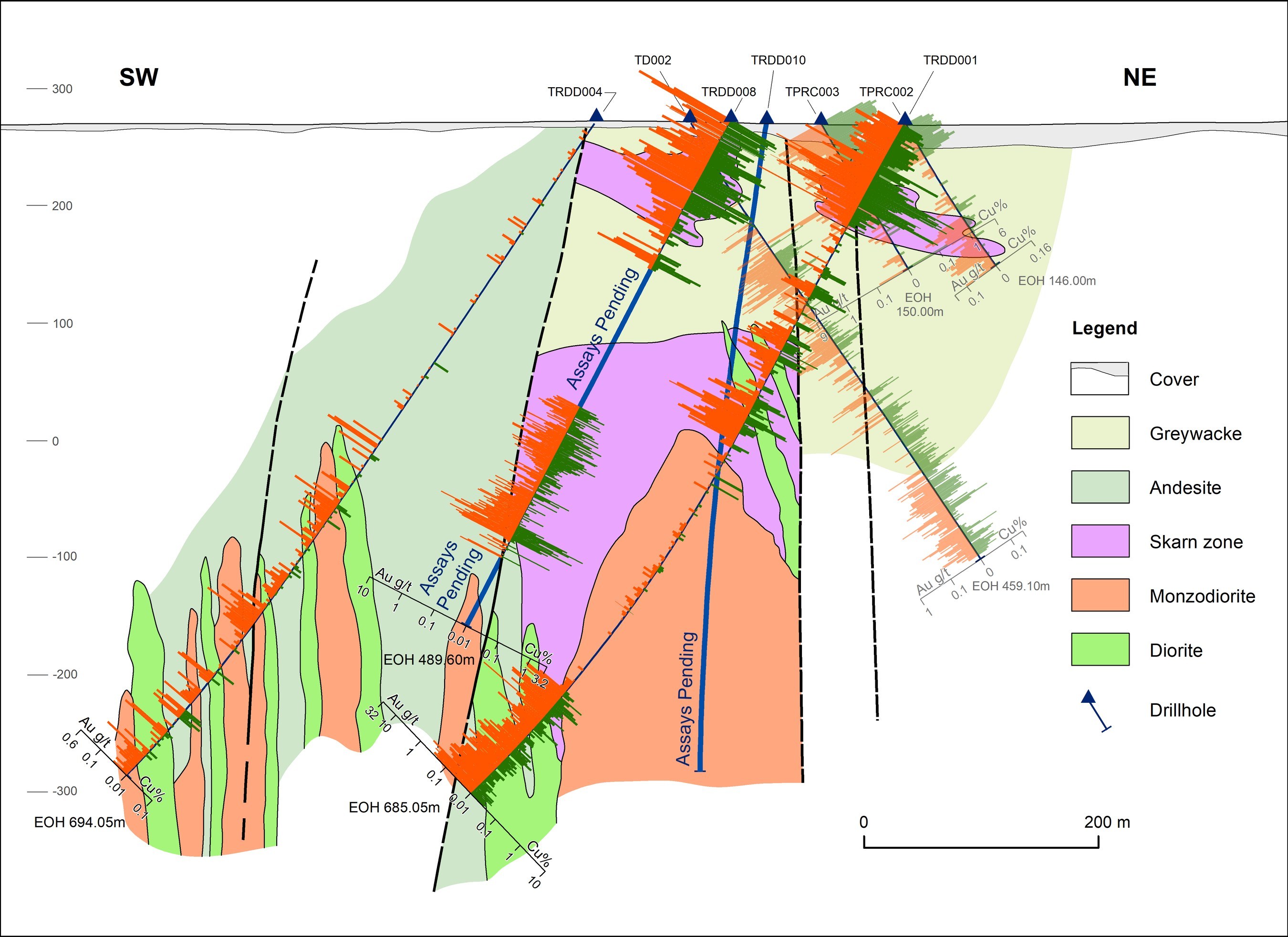 Further discussion on drill activities at Trundle Park are included in the Appendix to this press release on page 7.

As previously announced, TRDD006 has returned encouraging visual alteration and sulphides (including chalcopyrite). Assay results have reinforced the concept of close proximity to a potassic and higher-grade core of the targeted system, with multiple significant intervals of anomalous copper, gold and molybdenum.

TRDD006 has returned the broadest anomalous zones to date at the Mordialloc target including:

Prior Kincora drill hole TRDD002 is proposed to be reopened and extended as interpretation of the alteration and assay results suggest these may represent the halo of a mineralized porphyry intrusion system.

Further drilling in addition to the extension of TRDD002 is proposed to test the targeted finger porphyry setting and potential clustering of associated mineralized systems across a significant strike where anomalous surface and end of hole geochemistry, and geophysics are complementary – see Figure 2.  Similar vectoring from drill hole alteration indicators was the exploration approach that was the key to the discovery of Cadia-Ridgeway, the majority of the Northparkes deposits and also Alkane Resource’s recent discovery at Boda. 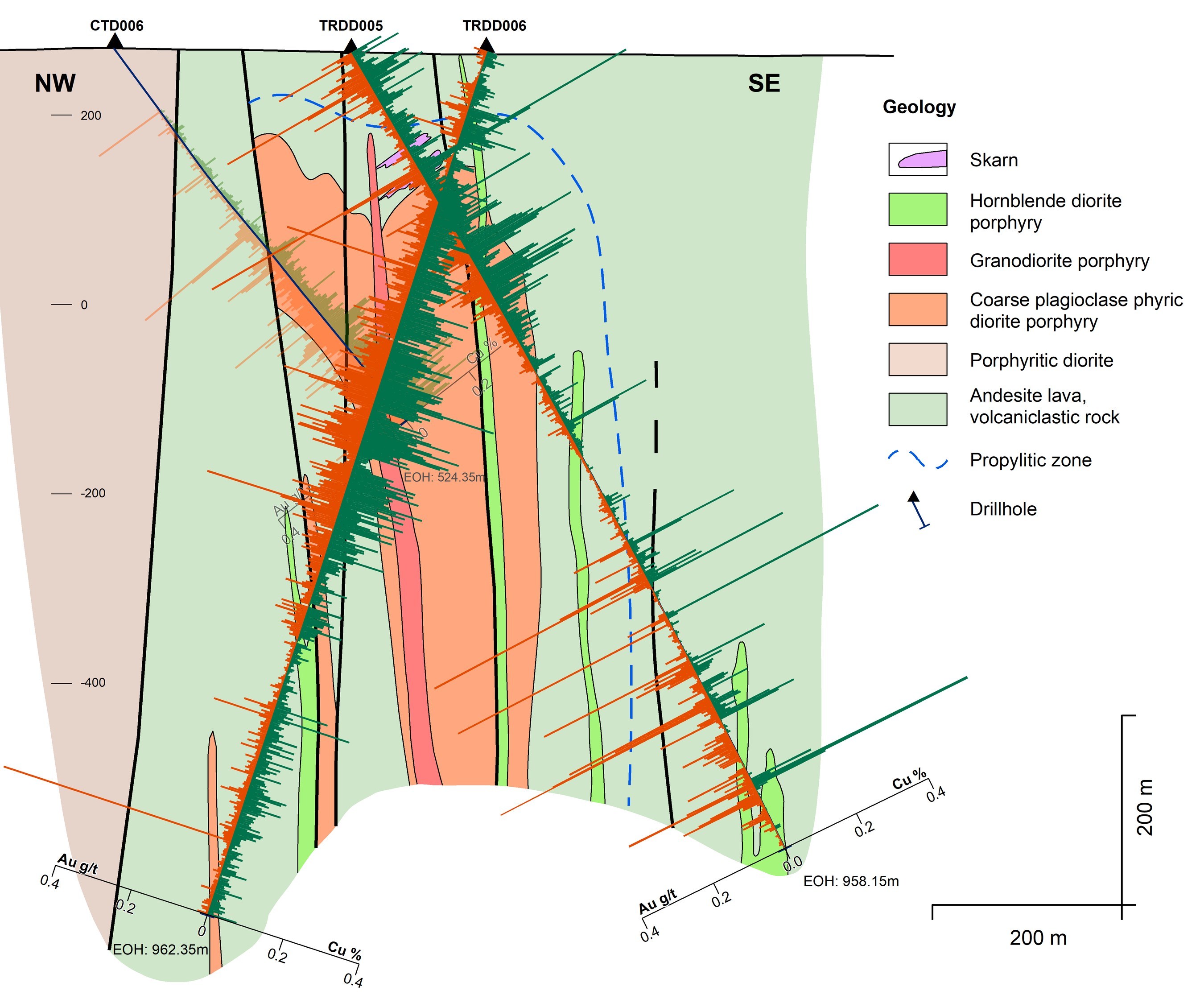 1-  Porphyry gold and copper intercepts are calculated using a lower cut of 0.10g/t and 0.05% respectively.

Drilling recommenced at the central Trundle Park prospect with diamond hole TRDD007, a 150-metre step out to north of previous hole TRDD001, testing a similar concept target of shallow high-grade skarn and porphyry copper-gold source at the depth.

While assay results are pending, visual geology logging of TRDD007 did not observe significant skarn or porphyry related mineralization, in a weakly altered and faulted package of rocks. Subsequent re-logging of this hole noted a major fault zone, dipping steeply to the west and sub-parallel to the NNE-SSW striking Tullamore Thrust Zone.

The original northerly extension and target of skarn mineralization and testing the potential for a causative intrusion remains untested by TRDD007 that is interpreted to have closed out the western strike potential.  Known shallow skarn hosted gold and copper mineralization has been intersected to the north, east and south that remain open and TRD007 was a significant learning hole, which coupled with recent re-logging and improvements to structural interpretation has resulted in a change in current drilling orientation.

TRDD008 is a 175-metre step towards the southwest from the collar of TRDD001 (or an 80 metres due south step out from the middle of the TRDD001 drill hole trace). From surface oxidized volcanoclastic and greywacke rocks with strong skarn development of pale-yellow garnet-hematite-magnetite-pyrite and minor chalcopyrite was observed to 104.8 metres.

This skarn zone is considered an upper zone, with volcanoclastic rocks measured to be dipping moderately towards the south-southwest. A steeply dipping fault zone towards the west continued from 104.8 metre to 135 metre downhole depth, mostly composed of sheared volcanoclastic rocks along with some garnet skarn as clasts, suggesting post-mineral faulting.

From 135 metre depth and towards 216 metre downhole depth, an intermixed sequence of propylitic altered greywacke and volcanoclastic rocks along with andesite lavas was observed. Progression of patchy red-brown garnet-magnetite-pyrite commenced from 216 metre depth and became more predominant at around 275 metre depth and onwards.

This lower skarn horizon comprising predominantly of brown-red garnet-magnetite-pyrite-with associated chalcopyrite and some intervals of anhydrite was observed from 275 metre to the faulted contact at 406.8 metre depth.

The scale of the two skarn horizons intersected in TRDD008 is much larger than that previously identified at the Trundle project, providing both encouragement to the potential for the at/near skarn system being a standalone target but also the scale of the larger system, and vectors to the targeted causative porphyry intrusion.

Previous explorer drilling has been extensive at Trundle with the completion of 2208 holes for 61,146 metres, but deeper drilling utilising modern exploration knowledge has been very limited. Over 92% of prior drilling has been completed to less than 50 metres depth and is considered to be too shallow, with just 11 holes beyond 300 metres (0.5% of holes drilled).

Following positive initial drilling results from Kincora’s maiden drilling program in August 2020, the Company completed an oversubscribed $5.33 million equity raising, with proceeds primarily to be used to expand the initial six hole program to over twenty drill holes with an additional 11,000 metres of drilling. Kincora’s primary targets, Mordialloc and Trundle Park, lie 8.5km apart and have not been drill tested since the industry leading HPX proprietary Typhoon IP system and detailed magnetic surveys were completed.

Drilling, Assaying, Logging and QA/QC Procedures
Sampling and QA/QC procedures are carried out by Kincora Copper Limited, and its contractors, using the Company’s protocols as per industry best practise.

All reported assay results are performed by ALS and widths reported are drill core lengths. There is insufficient drilling data to date to demonstrate continuity of mineralized domains and determine the relationship between mineralization widths and intercept lengths.,

The following assay techniques have been adopted:

Qualified Person
The scientific and technical information in this news release was prepared in accordance with the standards of the Canadian Institute of Mining, Metallurgy and Petroleum and National Instrument 43-101 – Standards of Disclosure for Mineral Projects (“NI 43-101”) and was reviewed, verified and compiled by Kincora’s geological staff under the supervision of Peter Leaman (M.Sc. Mineral Exploration, FAusIMM), Senior Vice-President of Exploration of Kincora, and John Holliday (BSc Hons, BEc, member of the Australian Institute of Geoscientists), Non-Executive Director and Technical Committee Chairman, who are the Qualified Persons for the purpose of NI 43-101.

The Company is currently drilling the only brownfield project (Trundle) held by a listed junior in Australia’s foremost porphyry belt (the Macquarie Arc, in NSW), with district scale project pipeline, and seeking to confirm its position as the leading pure play porphyry explorer in Australia.

The Company has assembled an industry leading technical team who have made multiple Tier 1 copper discoveries, who have “skin in the game” equity ownership and who are backed by a strong institutional shareholder base.

We have corporate offices in Vancouver and Melbourne. Kincora is listed on the TSX Venture Exchange under the ticker symbol KCC and is seeking a listing on the ASX for early in 2021 (subject to market conditions).

Previous Post
Kincora Announces Shareholder Meeting Results and New CFO
Next Post
Kincora to retain carried upside to Mongolia portfolio
Menu
This website uses cookies to improve your experience. If you continue to use this site, you agree with it.
Ok