Two rigs remain operational at the brownfield Trundle project, having recently completed a maiden Kincora hole at the Nyngan project.

John Holliday, Technical Committee chair, and Peter Leaman, Senior VP of Exploration, commented: “Since the $10m raising and listing on the ASX at the end of March the team has been executing the stated strategy of actively drilling our priority pipeline of projects in the Macquarie Arc. Other portfolio activities also been pursued with implications to value creation for Kincora shareholders, including for our Cundumbul and Mongolian licenses.

A recent highlight of our drilling at the Trundle Park prospect has been the best confirmation to date of our targeted “brownfield” Northparkes style setting and series of intrusive systems at the Trundle project. Continued systematic drilling is benefitting from improved geological understanding of the system and following up vectors provided.

Two rigs are currently active at the Trundle project, located approximately 10km apart at the Mordialloc North-East and Trundle Park prospects, ahead of drilling commencing this month at the advanced exploration and very prospective Fairholme project”. Figure 3: Trundle is the only brownfield porphyry project held by a listed junior in the Lachlan Fold Belt (LFB) with Northparkes (owned by CMOC and Sumitumo) the second largest porphyry mine in Australia (endowment 5.5Moz Au & 4.5Mt Cu1)

Improved geological understanding has provided the confidence and vectors to drill to comparable depths to where the core of similar systems occurs elsewhere in the wider and immediate region, at Cadia and Northparkes respectively.

With improved vectors and geological modeling benefitting from Kincora’s activities since drilling commenced in April 2021, hole TRDD022 was recently completed to 940m following up previous holes TRDD001 and TRDD010. TRDD022 is the deepest hole drilled at the Trundle Park prospect and provides the greatest “proof of concept” support for the targeted Northparkes and/or Macquarie Arc style causative porphyry intrusive type complexes within the Trundle project.

Figure 5: TRDD022 provides the greatest “proof of concept” support to date for the targeted causative porphyry intrusive type complexes within the Trundle project

Below shallow skarn alteration, TRDD022 intersected a thick interval of equi-crystaline monzodiorite from 376m to 723m depth, which was expected from the geological model (Figures 4, 5 and 6). Notable and positive indicators include:

Testing for the porphyry copper-gold potential associated with felsic intrusions like the monzodiorite and quartz-monzodiorite intrusions intersected in TRDD022, and also TRDD015 (previously reported, see April 22nd, 2021 press release), towards the north, northwest and west remains open at Trundle Park.

These results reiterate Kincora’s working geological model and provide further hallmarks of Trundle hosting the potential for, and anomalous setting to, a series of large-scale gold rich copper porphyry pipes that a responsible for the extensive skarn and near surface mineralization intersected to date and setting akin to the Northparkes mineralized system on the eastern margin of the same interpreted mineralized complex (which hosts an existing endowment 5.5Moz Au and 4.5Mt Cu1).  Continued drilling is planned at the Trundle project, with the next phase of drilling and land access at Trundle Park being planned (and already permitted). 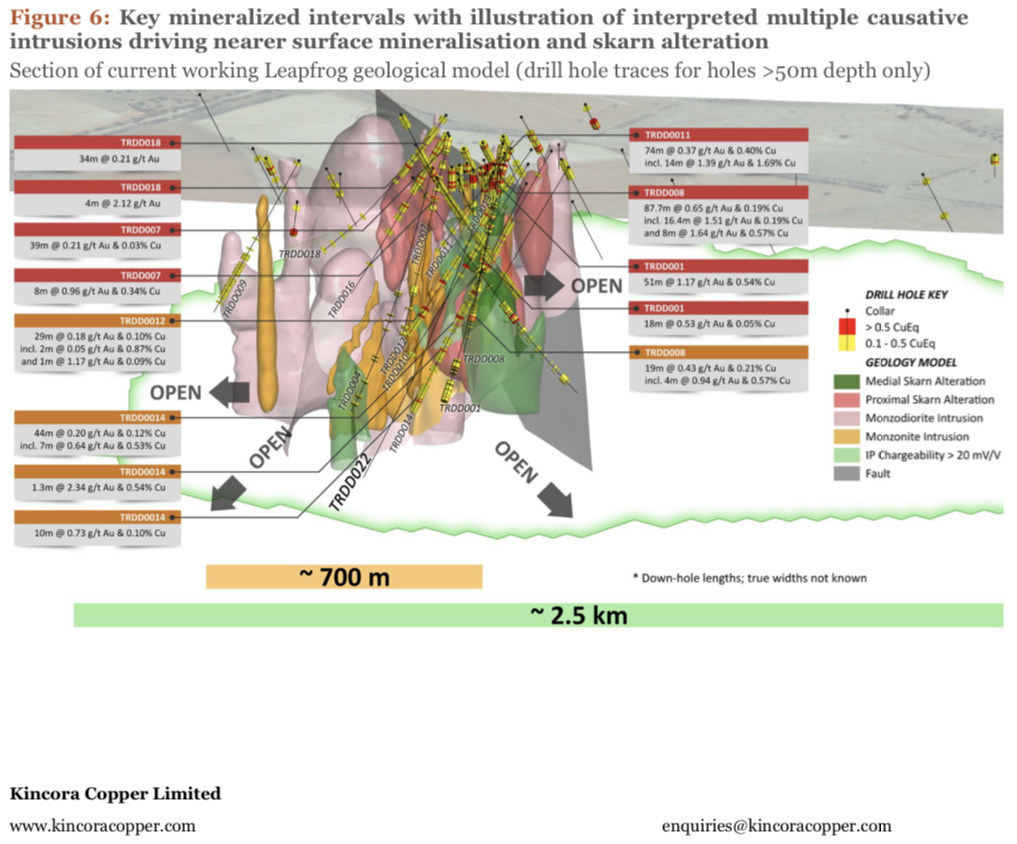 (a) Monzodiorite (grey) cut by orange-red quartz-monzodiorite at 626.5m down hole, in turn cut by quartz-carbonate veinlets (white).

(b) Monzodiorite (light-grey) with strongly developed and variable red alteration (interpreted hematite and outer potassic) along with fine magnetite veinlets (black) and some quartz veins (white), from 679m down hole.

(c) Brecciated monzodiorite (light-grey) with strongly developed and variable red alteration (interpreted to be outer potassic). Pyrite with chalcopyrite occur as matrix fill or along veins, from 714m (left) and 718m (right) down hole.

Photos of selected intervals which are not representative of the mineralization hosted on the whole property or Trundle Park prospect but are of the lithology’s intersected in the mineralized zones in these sections of drill hole. There is insufficient drilling data to date to demonstrate continuity of mineralized domains and determine the relationship between mineralization widths and intercept lengths, true widths are not known.

Drilling is ongoing along with further holes to follow up co-incident geochemical and geophysical anomalies around the peripheries of the complex both in the northeast and southwest. Drill hole TRDD024 has commenced testing the Mordialloc North-East (Mordialloc NE) prospect. A series of systematic holes by Kincora in this region is seeking to test an extensive zone of partial leach soil gold and copper geochemistry, with strong quartz-epidote alteration occurring in float rocks at surface and several historic shallow aircore holes intersecting elevated copper on the northern edge of the prospect. The favourable surface geology is located within the magnetic complex and co-incident with a large scale, high amplitude Induced Polarization (IP) chargeability anomaly, which was the focus of the prior explorer drilling at Trundle.

In 2015, then High Powered Exploration (HPX) followed up its 38km2 proprietary Typhoon gradient array survey with 3D modelling of pre-existing magnetic, gravity and geological data and drilled one hole (TRACD001). TRACD001 tested the northern section of the largest and highest amplitude chargeability anomaly identified across the Trundle project, in an area of no previous deep drilling.

Kincora’s drill hole TRDD024 is the first follow up drilling (and only the second hole to below 18m depth) in this prospect area since HPX walked away from its earn-in for the Trundle project following only one season of exploration before the 2016 downturn in the cycle.

Further assay results have been received for four holes with new intervals including:

The first hole (NYDD001) of a maiden Kincora drilling program at the Nyngan project has recently been completed to 628m testing one of a multiple magnetic complexes (interpreted to be Macquarie Arc terrane) on the license.

NYDD001 was a geological success intersecting basement volcanics (mainly basalts) from 306m (in-line with anticipated target depth) and various fossil inter bands. Geological logging coupled with analysis and age dating of the fossils is currently taking place ahead of further follow up drilling, potentially in the second half of the year.

Sultan has permits in place for up to 10-holes for 4500 metres of diamond drilling with a first pass 3-hole program completed for 1136 metres 1,2,3.   The initial program has intersected interpreted porphyry alteration with disseminated pyrite, trace chalcopyrite and bornite, been described as “extremely encouraging”, “marking the distal parts of an alkalic Au-Cu porphyry system” and “giving confidence to proceed with additional drill testing” with drill collars within 300 metres of the Cundumbul license boundary 1, 2, 3 (for further details refer to Kincora’s May 19th press release).

Permits and land access agreement are to hand with advanced preparations in progress to commence drilling this month at the Fairholme project for a first phase 6,000m drilling program.

Figure 9: Kincora’s Fairholme project has various hallmarks to the neighbouring world-class Cowal mine

Mineral tenure, zonation, alteration and structure provide significant encouragement for the Gateway to host a higher level porphyry associated system located 15km north and on trend from a similar series of high-sulphidation deposits in the gold corridor at Cowal – refer to Figure 9.

The last phase of exploration at Fairholme focused on the deeper porphyry related potential Until Kincora’s upcoming program looking to replicate the exploration targets, techniques and success achieved by Evolution Mining at Cowal, no shallower activities have taken place. Cowal’s gold inventory has grown from 3.4Moz to 9.7Moz (net of 1.7Moz mine depletion)1; with a target total endowment of 15Moz gold1 (1source: Evolution September 2020 investor day and February 2021 resource statement).

Resilience has received in-principal approval from the Australian Securities Exchange (ASX) for its planned Initial Public Offering (IPO, ticker reserved “RM1“), completed a pre-IPO financing and is in advanced preparations for a $5-6 million raising alongside the IPO.

A key use of proposed funds for Resilience (subject to successful IPO) includes drilling walk up and permitted targets at the Bronze Fox mining license and neighboring Tourmaline Hills exploration license, and commencing reviews of at/near surface oxide mineral systems at Bronze Fox (within the existing mining license and existing exploration target) for drilling and desktop economic studies. Field activities are expected to shortly commence post IPO in the next quarter.

The key commercial terms from the original term sheet remain in place and provide Kincora significant upside to exploration, project generation and development successes in Mongolia without near to medium term funding obligations.

Note for Tables 5-6:
Porphyry gold and copper intercepts are calculated using a lower cut of 0.10g/t and 0.05% respectively.
Internal dilution is below cut off; and, * Dilutions related with Core loss

Previous Post
Statement of CDIs on issue – KCC
Next Post
Kincora commences drilling at Fairholme Project
Menu
This website uses cookies to improve your experience. If you continue to use this site, you agree with it.
Ok